Yes it's now possible to explore Bhutan's culture, tradition, landscape and landmarks on helicopter. We can also customise the trip as per your personal interest and requirement. When you travel by air, you will see what the Bhutanese builders could not have imagined at the time they crafted the many monasteries, villages and ruins that dot the landscape. Be sure to bring your camera!

The scenic tour begins with a low flight over Paro Valley. The area, with its fertilize rice fields and the meandering Paro Chhu River that divides the valley in half, is an unparalleled sight. The river is wide and blue, with flat green banks extending on either side, and sandbars often visible along the winding turquoise length.

We then pass over ancient rural villages, followed by followed by some of Bhutan’s most famous and prominent sights, such as Paro Rinpung Dzong. This Buddhist monastery and fortress was built in the 15th century, later renovated in the 17th century, and is surrounded by greenery and an impressive cantilevered bridge. It currently houses the administrative and monastic body of Paro.

Slightly above the ridge is the Taa Dzong (currently the National Museum), and just minutes later, we will swoop low over the famous Tiger’s Nest Monastery for a close-up. With golden roofs, white walls and red accents, it is a true marvel. Seeing the monastery from the sky is a breathtaking experience, the only way to make a visit to such hallowed ground even more awesome.

We then head further north towards Mount Jomolhari, still flying along the Paro Chhu River, and will soon pass over the ruins of Drugyel Dzong, built in 1649 and now a ruin. Mouth Jomolhari, which stands at 7,320 metres above sea level, is straddled between the autonomous region of Tibet and Bhutan. It is also one of the highest virgin peaks in the world. Climbing is banned, as Bhutanese believe that deities live on top of the mountain. The helicopter will then land at the Jomolhari basecamp, Jangothang, for a quick snack and selfie time.

If you are lucky, you will get a chance to see the herds of blue sheep along the way. Properly called Pseudois nayaur or bharal, these sheep are only found in the Himalayas, in the countries of India, Nepal, Bhutan, Tibet and Pakistan. Blue sheep cling to the cliff sides of steep mountains, males living separately from females, feeding on grass. They are a rare sight to behold, but we often catch them in the air.

From there, we will return to Paro, experiencing more of Bhutan’s unspoiled wilderness along the way.

Experts on this Trip 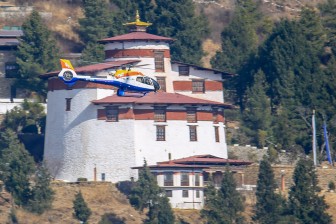 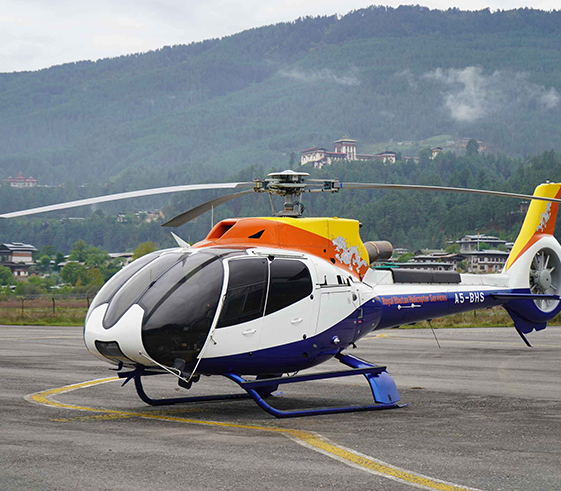 Today we fly to Paro, a historic town located in western Bhutan with tiny streets and brightly painted wooden shops. If skies are clear en route, we’ll be treated to views of the massive eastern Himalaya peaks, including Kangchenjunga, which at 28,169 feet is the world’s third-highest mountain, and 24,035-foot Chomolhari, Bhutan’s holy mountain. Once on the ground, you meet your Bhutanese guide and driver, who will greet you with a BIG Kuzu Zangpola (Welcome).

You will then check into your lodge on the outskirt of Paro town. Bhutanese owned and staffed, the Zhiwa Ling Heritage is set on 10 acres in the Paro Valley, within easy reach of Bhutan’s most revered temples and monasteries. From its traditional Bhutanese architecture to its elegant temple made with 450-year-old timbers to its Swedish under-floor heating, the hotel seamlessly combines past and present. Early morning, drive to Paro airport helipad (approx. – 20 mins) for your departure by Helicopter to Lhuntse - the wild East & also the ancestral home of the Wangchuk Dynasty. It will be a scenic 45 minutes flight with views of he eastern himalayas of Bhutan. Once we land in the village of Dungkar, Lhuentse, we will be ushered into our deluxe campgrounds with a chipdrel ceremony (a traditional welcome procession) by the local villagers dressed in their finest and especially women with their ornaments. We will dress up in the Bhutanese attire & join the village folks in visiting the manor house, community temple in the company of monks where a ritual cake ceremony will be performed to appease the local deity& guardian for peace & harmony in the days ahead. In the evening, witness Tsangmo (ancient poetry) competition among the men & women of the community followed by interactice session with the village headman & some of the local elders over a traditional meal with them. 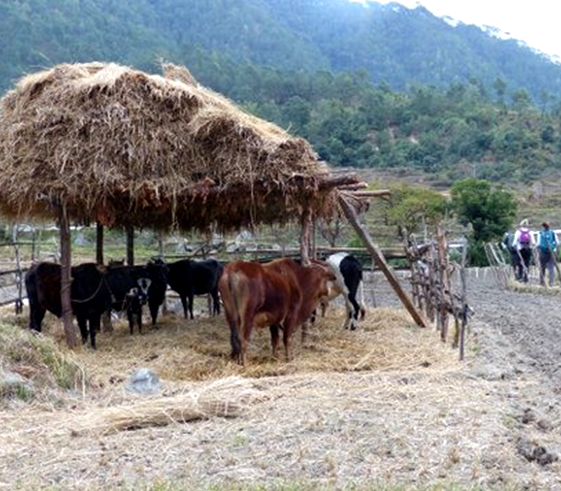 Becoming a farmer for the day
Day 3

Today we will drive inroads into the village to experience firsthand the daily lives of the village community of Bhutan. The activities will involve experiencing the typical daily chores of the family members of the Manor house. We begin our day with milking a cow, churning the milk for butter, making the offering to appease the guardian deity and then herding them into the forests. Next, we will help the farmers plough the field and do some plantation of the seasonal crops. After that, we will be invited to hoist a prayer flag along with the lay monks of the locality for a better harvest, good luck and for the liberation of the sentient beings from suffering.

We then break for lunch where the village children will join us who may have some very curious questions & who may want to exchange some songs & dances during or after the meal. Then we undertake a hike (depending on interest) on a popular trail to learn about the flora &fauna of the neighborhood. Upon returning to camp, we will be served refreshments & treated to an ancient Shaman performance that has become rare today. This is an opportunity to consult & engage in the astrology readings for your past, present &the future. Today is a special day for us in the village. We will participate as organizers and spectators in a fierce archery contest between two neighboring villages in a traditional style using bamboo bows and arrows. Archery matches in Bhutan have always been a very social game while also not foregoing the competitive spirit. The day starts with both teams consulting the astrology to determine the appropriate direction to enter into the field, the sequence of the archers & timing of the archers shooting across. There will be women cheerleaders who become unruly & will tease & call names to distract an archer belonging to the other village. Only the best, seasoned archers who are a bit tipsy on alcohol do well as the days pull along. The villagers with their families will fill the ground as spectators and also be there for picnicking with their pack lunches & also feast on the archers’ lunch. 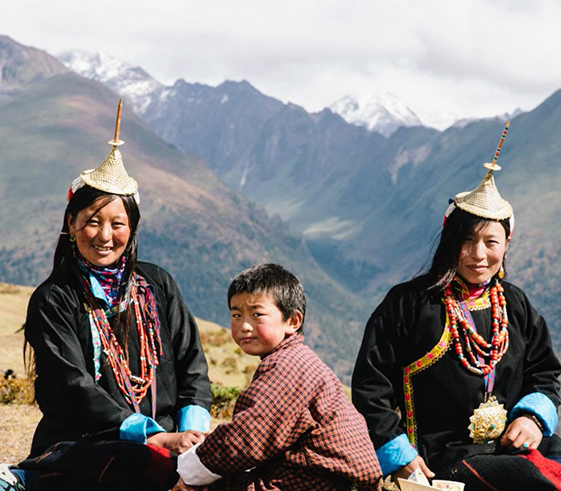 Today is the fifth day of our Journey. After breakfast, we will fly in the chopper and land at the highlands of Laya – the domain of the Nomads for the next two nights. The people here are yak herders and often are cut out of the lower lands for about 6 months of the year due to snow on the passes. Upon arrival in Laya, we will be received by the Yak herders & ushered to our camps set up for us. After settling at camp and lunch, we will go explore the villages of the Nomads to learn about their culture, tradition & ways of life. Our guide will take us to a local house where traditional Bhutanese hospitality is extended and a cup of tea and chang (locally brewed wine) is always offered. The people in this village are culturally very interesting, especially the women who wear conical bamboo hats decorated with turquoise and silver ornaments. In the evening we have an opportunity to see the dancing and singing performed by the nomads around a campfire and to taste the local alcohol, chang - if you are brave enough! 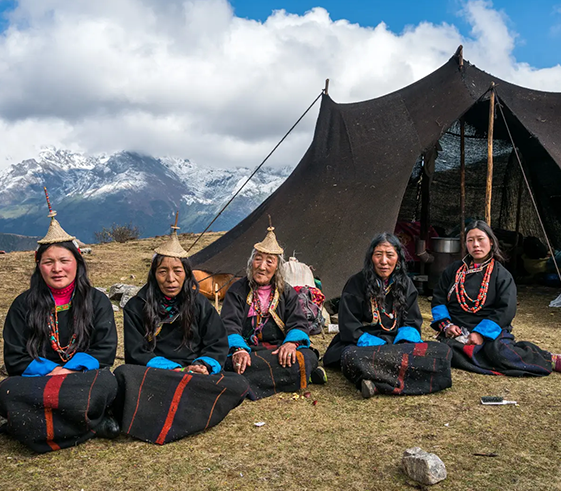 Today let your adventurous spirit take you on a challenging & pleasant day hike away from the village of Laya bordering the Tibetan plateaus. Situated at an altitude of 12,500 ft or 3800m, the surroundings of the village of Laya are usually accessible only by a three-day trek up from Punakha but are definitely worth the effort. The scenic journey will have you walking through some of the most pristine natural environments in the country and the panoramic view will mesmerize you with high snow peaks in the backdrop of the village. The hikers embarking on the Snow Leopard trek or the legendary Snowman Trek will have to pass through Laya.

The Day Excursion Hike will be planned according to the group dynamics and your guide will coordinate- a 5-6hrs return hike. Another option can simply relax at your campsite and explore the village and surroundings on your own, interacting with the people as they go about with their daily activities. 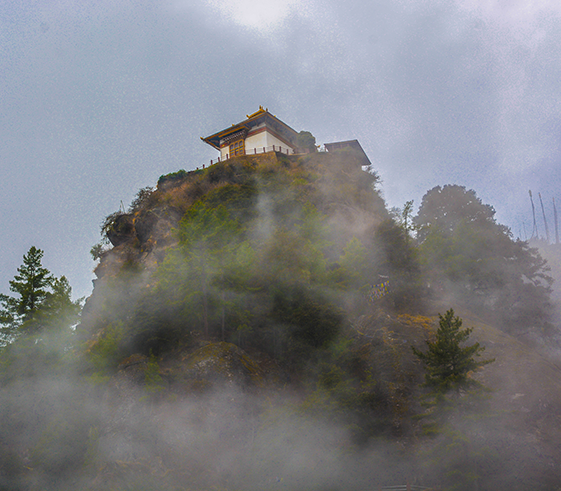 Fly back to Paro valley
Day 7

After breakfast, we will embark on a momentous mountain flight using the chopper to fly over two of the most beautiful mountains of Bhutan namely Mount Chomolhari & Mount Jichu Drake. Both these mountains are the domains of Bhutan’s protecting deities. The Royal Decree bans mountaineering in Bhutan to maintain the sanctity of these sacred mountains and also respect the sentiments of the local people. From your flight, you will also view the amazing lakes of Bhutan.

Once in Paro, we will embark on our last and the most important hike in the country to the Taktsang Lhakhang, known as The Tiger’s Nest.  This magical monastery clings to a vertical granite cliff 2,000 feet above the valley floor. The legend of Taktsang dates back to the 8th century when Guru Rinpoche (The Patron saint of Bhutan), in the wrathful form of Guru Dorji Droloe, is believed to have arrived at this site riding on the back of a tiger and subdued the evil spirits in the region.

We will end the day with a traditional stone bath & farewell dignitary dinner at the hotel. 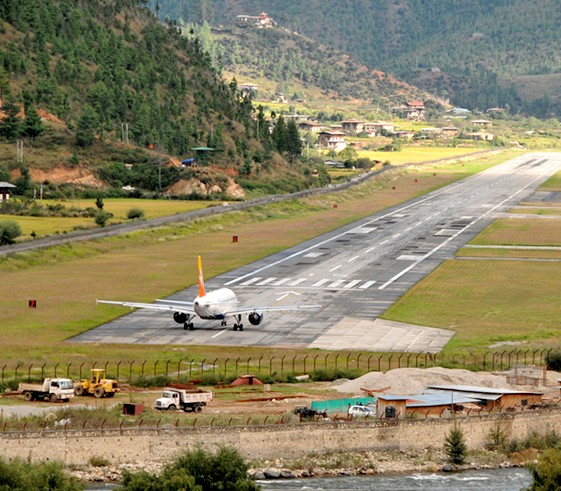 Departure from the Kingdom of Bhutan
Day 8

Today, your guide & driver will take you to the airport & bid their farewells there. We hope you had a wonderful time with us. We look forward to keeping in touch and seeing you again in near future! Bon Voyage & Tashi Delek.